Which books are best sellers in India? I couldn’t find any best sellers list in India substantiated with data such as number of books sold.
Every book website or book store develops its own list without any data points. I decided to check out four leading sources ( 2 websites and 2 book stores) and tried to develop a common list.
The sources I referred to are Flipkart, Infibeam, Crossword and Landmark bestsellers list. (Data retrieved on Oct 5).
My hypothesis is that if a book appears in more than one bestseller list then it is likely to be a best seller. Out of 200 + book list with this criteria , I narrowed down to 56 best sellers book list. ( excluding academics books )
I further classified these 56 best sellers among 3 categories –
Gold Best Sellers – Books which are present in all 4 lists
Silver Best Sellers – Books which are present in any 3 lists
Bronze Best Sellers – Books which are present in any 2 lists
Result are as follows
There are 5 Books in Gold Best Sellers
2 States by Chetan Bhagat
Connect The Dots by Rashmi Bansal
Jaya by Devdutt Pattanaik
Rich Dad Poor Dad by Robert T. Kiyosaki
Women & The Weight Loss Tamasha byRujuta Diwekar
There are 15 Books in Silver Best Sellers
Don’t Lose Your Mind Lose Your Weight by Rujuta Diwekar
Fault Lines by Raghuram G Rajan
Highway On My Plate by Rocky Singh, Mayur Sharma
I Have A Dream by Rashmi Bansal
Life Is What You Make It by Preeti Shenoy
River Of Smoke by Amitav Ghosh
Stay Hungry Stay Foolish by Rashmi Bansal
The 3 Mistakes Of My Life by Chetan Bhagat
The 7 Habits of Highly Effective by Stephen R Covey
The Emperor Of All Maladies by Siddhartha Mukherjee
The Fountainhead by Ayn Rand
The Girl With The Dragon Tattoo by Stieg Larsson
The Lost Symbol by Dan Brown
The Power by Rhonda Byrne
Theodore Boone: The Abduction by John Grisham 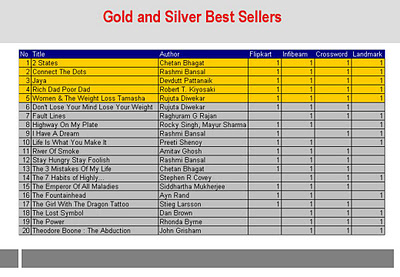 There are 36 Books in Bronze Best Sellers List
Aleph by Paulo Coelho
Big Girl by Danielle Steel
Bombay Duck is a fish by Kanika Dhillon
Chanakya’s Chant by Ashwin Sanghi
Corporate Chanakya by Radhakrishnan Pallai
Diary Of A Wimpy Kid: The Ugly Truth byJeff Kinney
Dork by Sidin Vadukut
Empire of the Moghul: Ruler of the World by Alex Rutherford
Employees First, Customers Second by Vineet Nayar
Five Point Someone by Chetan Bhagat
Geek Nation by Angela Saini
Good to Great by Jim Collins
Growing Up Bin Laden byJean P Sasson
India : A Portrait by Patrick French
India After Gandhi by Ramachandra Guha
Johnny Gone Down by Karan Bajaj
Mafia Queens Of Mumbai by Hussain Zaidi
Mini Shopoholicby Sophie Kinsella
Mother Pious Lady by Santosh Desai
Ohh Yes, I Am Single byDurjoy Datta, Neeti Rustagi
One Night At The Call Centre byChetan Bhagat
Only Time Will Tell by Jeffrey Archer
Sachin: 501 Things You Didn’t know by Suvam Pal
Superfreakonomics by Levitt Steven
The Alchemist by Paulo Coelho
The Facebook Effect by David Kirkpatrick
The Finkler Question byHoward Jacobson
The Girl who kicked the hornets nest by Stieg Larsson
The Immortals Of Meluha by Amish Tripathi
The Kane Chronicles: The Throne of Fire by Rick Riordan
The Secret by Rhonda Byrne
The Sixth Man by David Baldacci
The Steve Jobs Way by Jay Elliot, William Simon
The Winning Way by Harsha Bhogle, Anita Bhogle
Those in Peril by Wilbur Smith
Tinderbox by M J Akbar 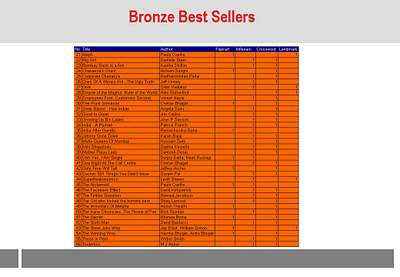 Since I had the best sellers data, the Analyst in me couldn’t stop analyzingPublishing Trends
Authors
Indian Authors are more than foreign authors in the best sellers list, though difference is narrower than I expected… 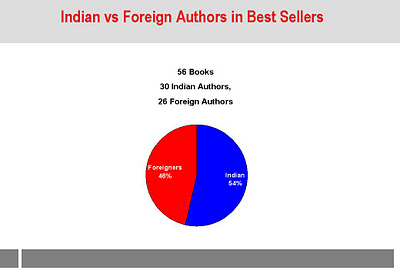 Publishers
Leading Publishers for Indian Authors are Westland, Harpercollins, Rupa, Penguin, Shristi and Random House which all have more than one publication in best seller list. The list was on expected lines but I am surprised by the relative ranking. 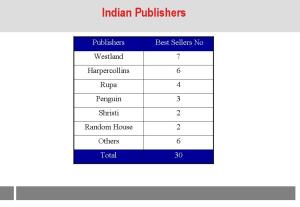 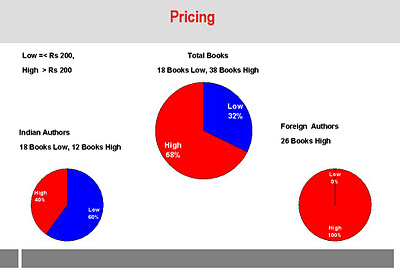 Pages
Contrary to my earlier perception, in the twitter age, the necessary condition for best seller is not crisp content or less pages. The two thirds of best sellers are with heavy content. 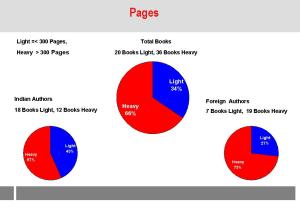 Any book which is among best sellers list even after 5 years of its publication is more than popular and can be called as classic ( irrespective of the critique) . I found 6 books in the list which are published before 2006

The Fountainhead
Good to Great
Rich Dad Poor Dad
The 7 Habits of Highly Effective
Five Point Someone
The Alchemist
Next few years will tell whether few of the popular books will move to classic status ( Contender are books by Rashmi Bansal, Rujuta Diwekar and Stieg Larsson among others) 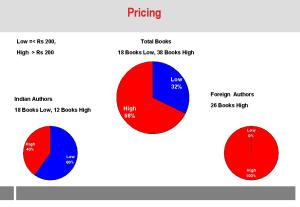 Conclusion
Can these trends about pricing, pages and publishers help any author in increasing his success chances in writing or publishing his book?